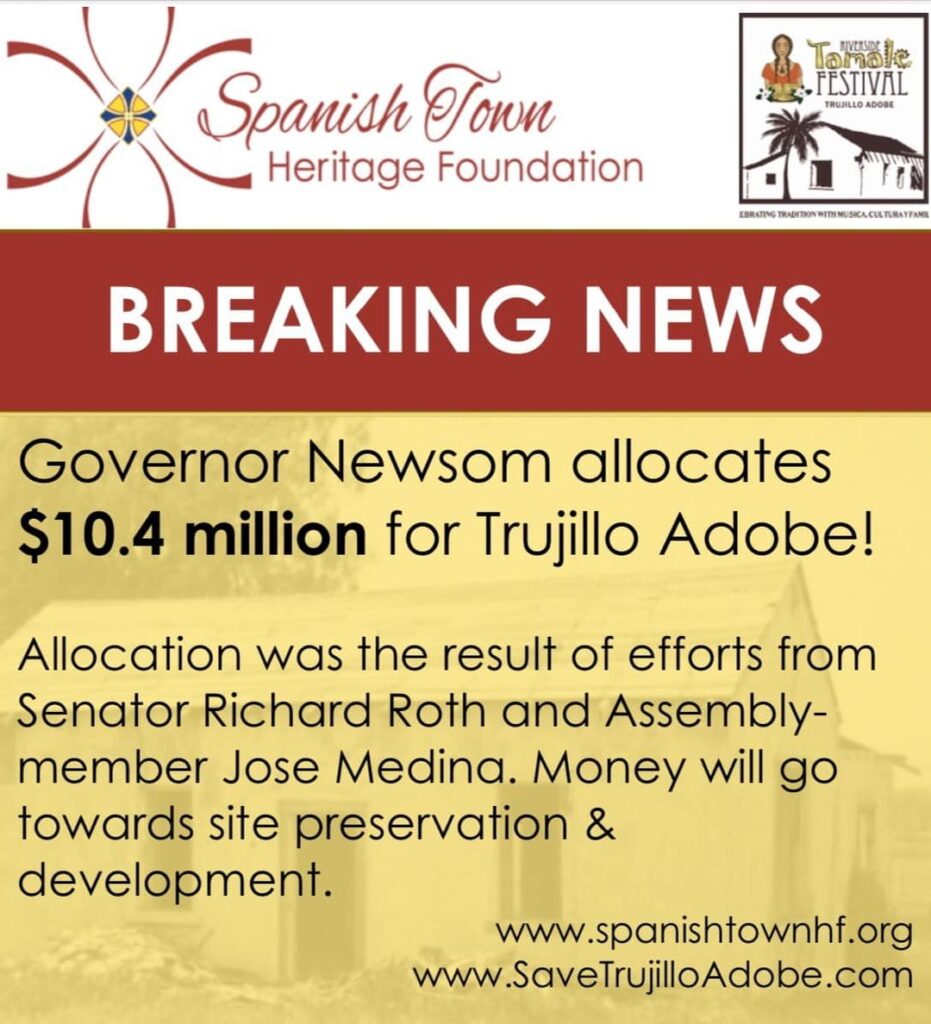 THE STATE OF CALIFORNIA ALLOCATES $10.4 MILLION FOR TRUJILLO ADOBE

Governor Gavin Newsom signed the 2022-23 California State Budget, which includes $10.4 million in funding for Riverside’s historic Trujillo Adobe. Funding is slated to preserve the remaining structure, site expansion and renovation. The funding will also help with the development of a museum for the public to tour, engage with and learn about the history of the Trujillo Adobe.

Questions regarding funding (See Below)

Spanish Town Heritage Foundation, a nonprofit dedicated to the preservation of one of Riverside’s oldest structures, the Trujillo Adobe, announced the Adobe was named to the National Trust for Historic Preservation’s “11 Most Endangered Historic Places” list for 2021. It is only the second Riverside building to ever make the list. 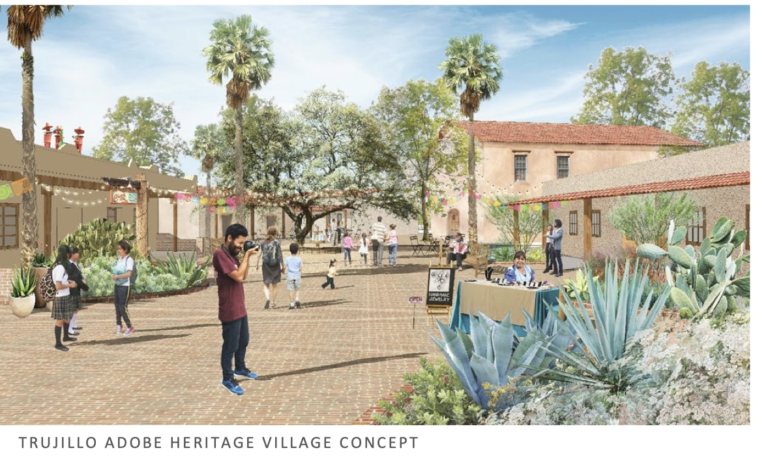 Supporters of the Trujillo Adobe continue to advocate for the Warehouse Moratorium in the Northside.
The Riverside City Council approved a 45-day moratorium Tuesday, March 10, and council members said they intend to extend the pause on warehouse 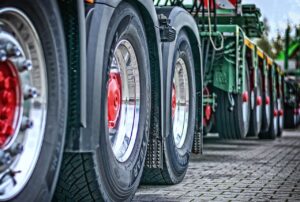 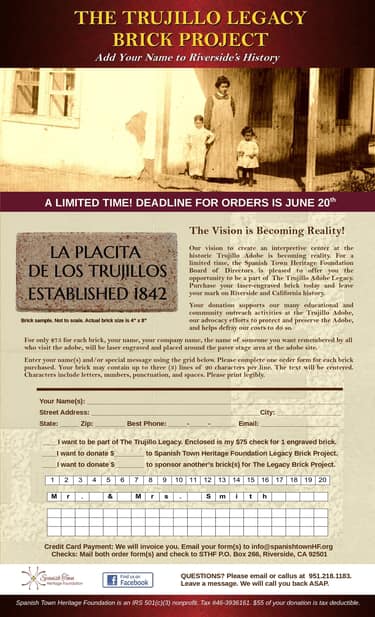 Spanish Town Heritage Foundation kicks off the Trujillo Legacy Brick Project! All bricks purchased will be incorporated at the Riverside Trujillo Adobe historic site and will help fund many maintenance projects needed at the site.

UNIDOS for The Cheech

The Latino Network, the Greater Riverside Hispanic Chamber of Commerce, and Spanish Town Heritage Foundation formed an alliance in December 2017 and pledged a combined organizational commitment of $90,000 to The Cheech. They further pledged to raise an additional $160,000 for a grand total of $250,000 by expanding the alliance to all Chicano Latino organizations, big and small, across the region. This alliance is now called UNIDOS. 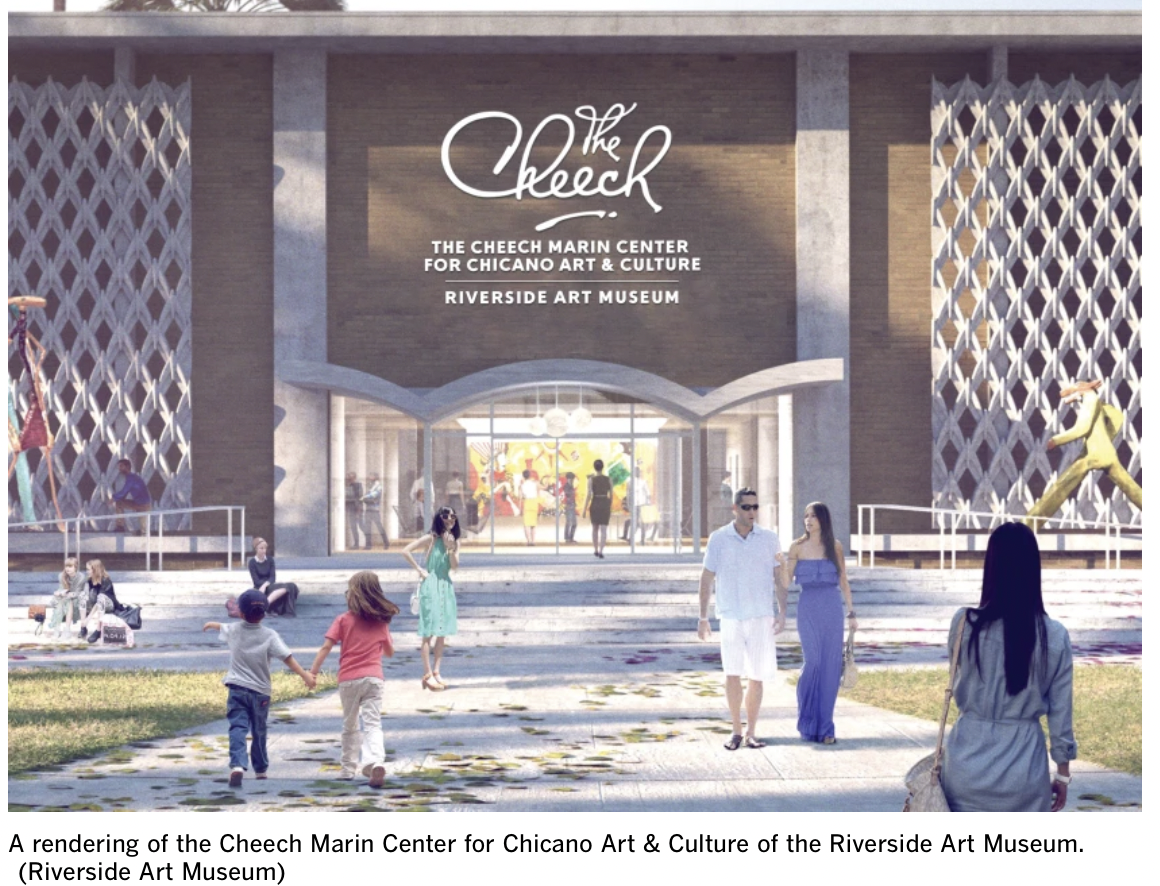 When was Spanish Town Heritage formed?

Founded in 2014, by three cousins, Nancy Melendez, Suzanne Armas and Darlene Trujillo-Elliot.  In 2013, Lenny Trujillo hosted an event at the Agua Mansa Cemetery, where the three cousins came together to ensure the protection of the Trujillo Adobe.

What is the core mission of Spanish Town Heritage Foundation?

What was the early settlement called and where was it located?

The settlement was known by many names, Agua Mansa, La Placita de los Trujillos, San Salvador and Spanish Town. At the time California was just formed and the area was under Los Angeles County.  Eventually it would become San Bernardino County and then Riverside County.   The area was  former settlement and the earliest community established.

The communities of Agua Mansa and La Placita, across from each other along the Santa Ana River, were the first non-native settlements in the San Bernardino Valley and had the first church and school. These villages were the largest settlement between New Mexico, and Los Angeles during the 1840s. Today, the Agua Mansa Pioneer Cemetery is all that remains of these once- thriving communities.

Why is the Old Spanish Trail significant to the Trujillo Adobe?

On September 22, 1838, Juan Manuel Lorenzo Trujillo (1794-1855) led an advance party over the Old Spanish Trail from New Mexico to California. This expedition changed not only the lives of their children but also the lives of everyone who participated in this journey, their descendants and those fortunate enough to live or work in La Placita de los Trujillos. To help study, preserve and protect, interpret and educate, and promote respectful use of the Old Spanish National Historic Trail and closely related historic routes, an OSTA Inland Empire chapter, called the Agua Mansa chapter, was established in November 2016.

Are there other historic sites that are connected to the Trujillo Adobe?

The communities of Agua Mansa and La Placita, across from each other along the Santa Ana River, were the first non-native settlements in the San Bernardino Valley and had the first church and school. These villages were the largest settlement between New Mexico, and Los Angeles during the 1840s. Today, the Agua Mansa Pioneer Cemetery is all that remains of these once- thriving communities.

How much money was received?

Who will be receiving the money?

The money will be held and managed by Riverside County Regional Park and Open-Space District (RivCo Parks). While RivCo Parks will be managing the money, there will be close coordination with Spanish Town Heritage Foundation.

What will the money be used for?

The money will be used for the preservation of the Trujillo Adobe site and development that will support frequent public visitors, such as school field trips. While details still need to be finalized on this future project, the initial vision for the site project includes addition of restrooms, parking lot for vehicles and school buses, infrastructure to protect the remaining Trujillo Adobe, development of a heritage interpretation program, and possible land acquisition. This process will take time, but it is the goal of STHF to develop something that can be enjoyed and appreciated by all.

How can I follow the progress of the proposed project?

Funding and future project updates will be found on the RivCo Parks website and the Spanish Town Heritage Foundation website www.spanishtownhf.org.

How will there be accountability of the monies spent?

RivCo Parks will enter into a contract with the state to accept the funds. This contract will outline the manner in which we have to spend the funds and will have to go to the Riverside County Board of Supervisors for approval. All the funds will be spent in support of the Trujillo Adobe site.

Will there be a community meeting?

Yes. The future site development project will require community input. A community meeting/s will be held in the future in coordination with RivCo Parks and all are welcome to participate.